When connecting to a Windows Server 2008 R2 Published Desktop (provisioned as a VM, not a physical machine) with XenDesktop 7.x you might receive a black and blank Desktop, no Desktop Icons are shown, and the Desktop stays that way: 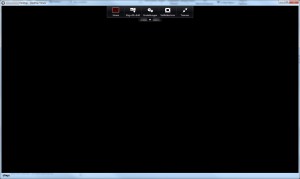 Whereas connecting with RDP works normally, as long as the users are members of the local group Direct Access Users.

There are no significant Warnings and/or Error messages in the corresponding server’s Application and/or System Event Log. Everything seems to look and work as expected. In my case the error started showing up after moving the VM from one Hyper-V server to another Hyper-V server.

Having a look into the Citrix\Device\Redirector Application Log in Event Viewer showed an Event ID 261, Event Source: Redirector: 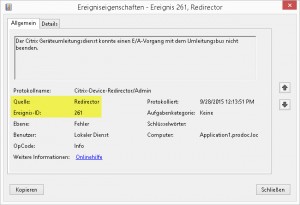 This can happen due to the following reasons:

Problem Cause
There are several that could have caused the issue.
A majority of them are related to drive mappings or folder redirections in logon scripts, user profiles and/or GPOs, which point to an incorrect location or experience delays mapping during the logon process.

“On a TCP/IP-based wide area network (WAN), communication over some routes may fail if an intermediate network segment has a maximum packet size that is smaller than the maximum packet size of the communicating hosts–and if the router does not send an appropriate Internet Control Message Protocol (ICMP) response to this condition or if a firewall on the path drops such a response. Such a router is sometimes known as a “black hole” router.”

Locate and fix a possible Black Hole Router. Furthermore regard these best practices for your servers:

When using VMware as a Hypervisor change the default graphics card driver coming with VMware tools. The resolution is to uninstall the WDDM or VMware SVGA driver from the affected VM and install Microsoft SVGA driver instead. Refer to CTX124877 and CTX123952: 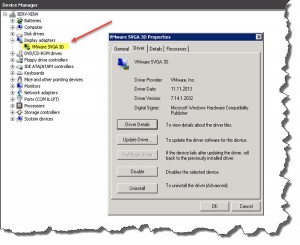 HDX 3D Pro can only be used on physical machines as long as a compatible graphics card has been installed. In case you provisioned your servers from a base image that somehow utilized this feature in the first place it might come down to the black screen issue when connecting with HDX/ICA. Simply uninstall the VDA from the affected machine, reboot the server, and then reinstall the VDA again. This should suffice.

Shut down the affected VM and execute the following command in Powershell on your Hyper-V Server:

In case Secure Boot is enabled on the affected VM the symptoms of a black screen will appear thus rendering the server useless. When trying to install the VDA on a VM with Secure Boot enabled you’ll receive a warning message pointing you to CTX137731. Though the message can be ignored and the installation process continued this is not recommended: 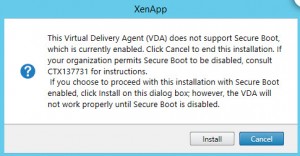 Simply uninstall VDA from the affected server, reboot the server, and then reinstall the VDA.

Add or set the following registry key on the XenApp/XenDesktop server(s) to resolve the issue:

There are a couple of different registry tweaks available that I usually apply to my Citrix Workers via GPO Preferences as well: