As I did quite some Exchange migrations (including single as well as multi tenancy environments) I was always wondering whether there are any additional post migration tasks that need to be addressed before you start removing your legacy Exchange server(s) from your organization. For instance, as with migrating from Exchange 2003 to, say, Exchange 2010 you had to update Global Address Lists, Address Lists, Offline Address Books, et al to the new Exchange 2010 version by executing the corresponding cmdlts, e.g. Move-OfflineAddressBook. Now when migrating from Exchange 2010 to Exchange 2016 (or even just from Exchange 2013 to Exchange 2016 with both having an almost identical architecture) what remains of those post migration tasks? Which ones are a necessity? What kind of architectural changes require you to think different and adjust certain settings prior to removing your legacy Exchange server(s)?

By talking about post migration tasks, what do I mean? Well, after you’ve successfully migrated all your databases, mailboxes, public folders, send/receive connectors, et al, what’s still left? Maybe the not so obvious parts of your Exchange infrastructure that need addressing as well in order to avoid any unwanted behaviors and/or errors after you removed the last legacy Exchange server from your organization.

The following article is a concentrated and (hopefully) comprehensive set of information collected from various sources. I’m not reinventing the wheel here, just trying to consolidate every kind of post migration task that deems necessary for a successful Exchange 2016 migration. Pls feel free to comment whether this all still is reasonable and required.

The article consists of the following topics:

Before any production services are cut over to Exchange 2016 it is imperative to move the arbitration mailboxes. Arbitration mailboxes are system mailboxes used to store organization-wide data, e.g. administrator audit logs, metadata for eDiscovery searches, and Unified Messaging data. They need to be hosted on the highest version of Exchange in the organization. The mailboxes themselves are typically quite small and will move fairly quickly.

Run the following command to move the mailboxes to a database on your Exchange 2016 server:

Verify that you’ve successfully migrated all of your abritration mailboxes to an Exchange 2016 database by running:

Furthermore upgrading distribution groups from Exchange 2007 to Exchange 2016 has 3 steps:

An OAB is used by Microsoft Outlook clients in Cached Exchange Mode for address book lookups when offline. OABs are also critical in reducing the workload on Exchange servers as cached mode Outlook clients will always query the local OAB first.

OAB and Generating Mailbox:
In Exchange 2016, the OAB is first generated in the Arbitration Mailbox so understanding which database houses this Arbitration Mailbox is key to understanding the server that is currently responsible for generating the OAB. Once generated, the OAB is then later copied as a series of files to the \ClientAccess\OAB folder on each mailbox server.

We need to move the OAB generation to Exchange 2016. It doesn’t matter how many OABs we have in our organization, but we still need at least one (1) mailbox with PersistedCapabilities of OrganizationCapabilityOABGen, and it doesn’t really matter which mailbox we use. We can even set which mailbox generates which OAB.

Storing the OAB files in a dedicated Organization Mailbox (e.g. OABGen) makes the OAB files more resilient. You can change the Arbitration Mailbox for an OAB at any time as long as the corresponding OAB has an ExchangeVersion property value of at least 0.20 (15.0.0.0):

GeneratingMailbox can only be set on an Exchange 2012 or newer OAB.

Custom OABs:
As of a multi tenancy hosting configuration with Exchange 2016 and its subsequent requirement of Address Book segregation I once had to implement a couple of custom built OABs. The goal is to host multiple groups of people (i.e. customers) within the same Active Directory and Exchange Organization and give them their own address book environment. It is important that these customer groups don’t see each others address lists because they might contain sensitive information.

To get a list of all OABs run the following command: 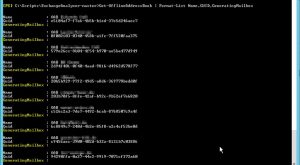 To create new OABs based on your existing OABs run the following command which adds a subsequent 2016 to the OAB’s Name property and retains the corresponding Address Lists used to populate the OAB in the AddressLists property:

Now you can remove legacy OABs from Exchange 2010 (consider Address Book Policy dependencies, which need to be adjusted prior to removing legacy OABs!)

By browsing to https://<FQDN>/oab/<OAB GUID>/oab.xml to the OAB from the clients using IE and not get any cert or IIS errors, The FQDN value depends on what’s configured for the OAB internal/external URLs: 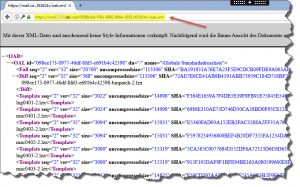 The OAB GUID can be retrieved by issuing the following command:

You can’t move a previous version of an Exchange Offline Address Book to Exchange 2013. To create a new OAB for Exchange 2013, please use the New-OfflineAddressBook cmdlet.

After all adjustments have been completed you can update your OABs by running:

Furthermore you should ensure that each and every database has an OAB assigned in order to avoid mailbox users on the databases without OfflineAddressBook set re-downloading the entire OAB. This can be performed with:

As of a multi tenancy hosting configuration with Exchange 2016 and its subsequent requirement of Address Book segregation I once had to implement a couple of custom built OABs as well as Address Book Policies. The goal is to host multiple groups of people (i.e. customers) within the same Active Directory and Exchange Organization and give them their own address book environment. It is important that these customer groups don’t see each others address lists because they might contain sensitive information. The recommended approach defined by Microsoft: 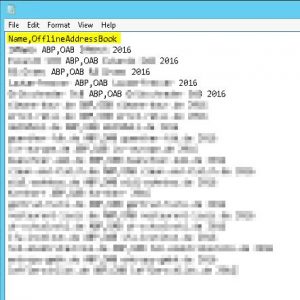 Run the following command in order to assign the newly created Exchange 2016 OABs to your existing ABPs (assuming you have an appropriate naming convention in place that allows for easy adjusting), and verify whether all ABPs have the corresponding OAB successfully assigned:

You can verify this by using ADSIEdit.msc and navigating to CN=Microsoft Exchange,CN=Services,CN=Configuration,DC=DOMAIN,DC=local. Open this node’s Properties and check the value of attributes globalAddressList and globalAddressList2 that contain all the GALs being present in your Exchange environment and thus can be seen and used by any Exchange server wihtin your Exchange organization: 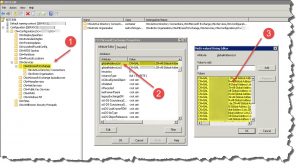 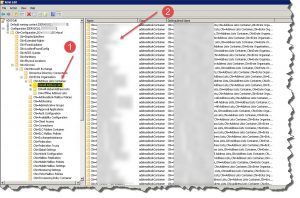 Client Access servers can be removed when they are no longer serving any client requests. You can verify that no more traffic is hitting the Client Access server by reviewing the IIS logs on the server. Note that you will likely see continued hits in the logs from the Exchange 2016 servers themselves, or from any connections to the /PowerShell virtual directory by administrators. You can use Log Parser to determine which users (if any) are still making connections to the server. 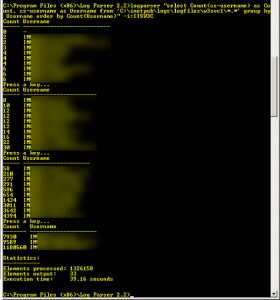 Just be aware that querying a wildcard like ‘C:3svc1*.*’ will return results from any log file in that directory, which may be months or even years worth of log data. You can refine the search by removing older log files from the directory C:\inetpub\logs\LogFiles\W3SVC1:

Every Send Connector has a HomeMtaServerId Property that usually refers to your legacy Exchange 2010 server and needs adjusting, as well as the SourceTransportServers Property. To get the current Send Connector settings run the following command:

To adjust both HomeMtaServerId and SourceTransportServers with your current Exchange 2016 server, run the following command:

For ease of administration you could configure all of your devices that use Exchange for messaging purposes, e.g. sending alert and/or monitoring mails right through a dedicated Receive Connector, with a common FQDN mail.domain.com, thus relieving you from having to adjust those systems after every migration and/or change in server name or IP address, as you only need to adjust the corresponding DNS record in your DNS zone.

In your DNS zone editor add a SRV record with the following settings: 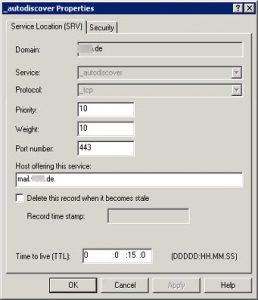 Once internal access is verified and everything is working as expected, update the external HTTPS publishing which for instance can be done via a NAT rule for TCP port 443 configured on a firewall. Send the traffic to Exchange 2016 (or a Load Balancer where applicable) instead of Exchange 2010 server.

In the end you should have something like this:

When trying to dismount and remove the last database from your Exchange 2013 / 2016 server you might receive a similar error message stating:

After ensuring that there were no Public Folder Mailbox Migration requests by executing the Get-PublicFolderMailboxMigrationRequest cmdlet, I did a quick search on the internet and found Terence Luks post, stating “that there may be a lingering object in the Configuration container that is not returned by the PowerShell cmdlets.” I did as Terence suggested:

I then went ahead and launched ADSIedit, connected to the Configuration container then browsed to: 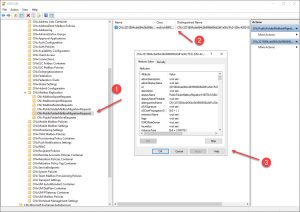 Opening these items showed that they were objects that corresponded to the day I had started the migration batch for the public folder migration so I went ahead and deleted these items in the folder then forced replication via repadmin /syncall /AdeP on a domain controller and was then able to delete the mailbox database.